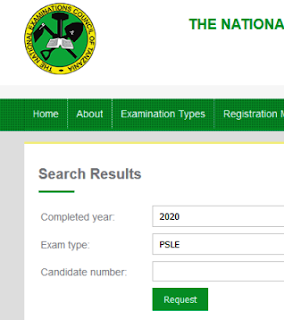 National Examinations Council of Tanzania (NECTA in swahili know as "Baraza la Mitihani la Tanzania" is an agency of the Tanzanian government, headquartered in Dar Es Salaam at Mwengwe area, that proctors tests given nationally. It manages Education Examination in Tanzania

It was established on 21 November 1973. Prior to that time the East African Examinations Council(EAEC) served Mainland Tanzania and Zanzibar.
The latter withdrew from the EAEC in 1970, and the Ministry of Education Curriculum and Examinations Section briefly took over examination proctoring for Mainland Tanzania when it withdrew from the EAEC in 1971.
The Tanzanian government began hiring employees for NECTA in 1971, and Parliamentary Act No. 21 of 1973 established NECTA
NOTE:
National Examinations Council of Tanzania (NECTA) has introduced new system that allow students of different levels in Tanzania to request their results by writing required information as follow below:-

NOTE: Make sure you fill your information very correctly so as system can retrieve data from database
CLICK LINK HAPA CHINI TO REQUEST NECTA RESULTS: