A chemical equation is a representation of a chemical reaction with the help of symbols and formulae of the substances involved in the reaction.

A Molecular equation is the one which shows the reactants combining and the products formed, in their elemental or molecular forms in a chemical reaction. An example of a molecular equation is the reaction between sodium and water to produce sodium hydroxide solution and hydrogen gas:
2Na(s) + 2H2O(l) → 2NaOH(aq) + H2(g)
In this context, sodium (in elemental form) reacts with water (in molecular form) to produce sodium hydroxide (in molecular form) and hydrogen gas (in molecular form).
Word Equations for given Chemical Reactions
Write word equations for given chemical reactions
A word equation is a short form of expressing a chemical reaction by word. Chemical reactions can be summarized by word equations that show all the reactants and the products. This type of equation links together the names of the reactants and the products. For examples, the burning of magnesium in air to produce magnesium oxide can be represented by the following word equation:
Magnesium + Oxygen → Magnesium oxide
Another example is the reaction between sodium and chlorine to give sodium chloride (common salt)
Sodium + Chlorine → Sodium chloride
Equations like these sometimes give us some information about the products formed when different substances are reacted together. But equations can be made even more useful by writing them using chemical symbols and formulae.

Any method for representing a chemical reaction must meet basic certain requirements. These are:

<> the chemical nature of the reactants as well as those of the products must be clear. The reactants can be in solid, gaseous, liquid or aqueous forms.

Consider the reaction between potassium and water:

<> The chemical nature of the reactants [potassium (solid); water (liquid)] and the products [potassium hydroxide (aqueous); hydrogen (gas)] has been shown.

<> The reactants (potassium and water) and the products (potassium hydroxide and hydrogen) are separated by an arrow (→) which also indicates the direction of the reaction.

HOW TO PREDICT REACTION PRODUCTS

There are a few ways to predict the reaction products. Firstly, when the reactants are mixed and then isolated, products can be identified. Prediction can also be made when elements from the same group in the Periodic Table show similar reactions.

Finally, chemical reactions can be classified into different categories such as combination (or synthesis), decomposition, displacement, precipitation, and redox reactions as described in details below:

Types of Chemical Reactions
When a chemical reaction occurs, it is obvious that the changes have taken place. However, under ordinary conditions it is not easy to see how a reaction goes on. The neutralization of an acid solution with an alkali produces no change that you can see. However, reaction has happened.

The temperature of the mixture increases and the new substances have formed which can be separated and purified. Ideally, we can tell whether a reaction has taken place if one or more of the following changes are observed:

(a) heat change has taken place and can be detected by the change in temperature of the products;

(b) a precipitate is formed;

(c) there is a change in state of the reactants, i.e. gas, liquid; solid;

(d) a colour change has occurred; or

(e) a gas is evolved and can be identified by its colour, smell or by effervescence.

Combination or synthesis (A + B → C)
Synthesis reaction occurs when two or more simple substances (elements or compounds) are combined to form one new and more complex substance. The general form of a synthesis reaction is:
element or compound + element or compound→ compound.
The reaction between iron and sulphur to form iron (II) sulphide is the best example for this kind of reaction. Iron combines directly with sulphur to form iron (II) sulphide:
Fe(s) + S(s) → FeS(s)
Another example is the reaction between hydrogen and oxygen to form water:
Hydrogen + Oxygen → Water
Decomposition (A →B + C)
Decomposition occurs when one compound breaks down into simpler substances. All decomposition reactions have one thing in common: There is only one reactant and it breaks down into two or more simpler products. Decomposition can be brought about by heat, light, electricity and even enzymes or catalysts.
Decomposition by heat
Decomposition caused by heat is termed as thermal decomposition. An example is the decomposition of calcium carbonate (limestone) which breaks down into calcium oxide(quicklime) and carbon dioxide gas when heated.

The formula equation makes use of chemical symbols and formulae to represent a chemical reaction. An example is the reaction between iron and sulphur to form iron (II) sulphide: Fe + S → FeS

Steps for writing a chemical equation

These are the steps to follows when writing a chemical equation:

<> State the reaction equation in words, for example, carbon reacts with oxygen to form carbon dioxide.

<> Write the complete word equation using an arrow to separate the reactants from the products: Carbon + Oxygen → Carbon dioxide. Conventionally, the reactants are placed on the left-hand side and the products on the right-hand side of the equation. An arrow from left to right indicates that the reaction proceeds from reactants to products as shown.

<> Change the words into the correct symbols and formulae of the reactants and products: C + O2 → CO2

<> Balance the number of each type of atoms on each side of the equation.It is important to make sure that there is equal number of each kind of atom on the left of a chemical equation as on the right in order for your equation to comply with the Law of Conservation of Mass (or Indestructibility of Matter):

Matter can neither be created nor destroyed in the course of a chemical reaction. This means that the total mass of all products of a chemical reaction is equal to the total mass of all reactants. All atoms appearing on the left-hand side must also be presented on the right-hand side. No atom should appear as a product if it is not present as a reactant.

A balanced chemical equation has an equal number of atoms of different elements of the reactants and the products on both sides of the equation. A balanced equation gives us more information about a reaction than we get from a simple word equation.

Below is a step-by-step approach to working out the balanced equation for the reaction:

<> Write the chemical equation for the reaction with the correct symbols and formulae of the reactant(s) and the product(s).

<> Identify different atoms of the different elements of the reactant(s) and the product(s).

<> Check whether these different atoms are equal on both sides of the equation. Some atoms may balance each other directly.

<> Balance the atoms on each sides of the equation by Hit and Trial Method.

You can still check to find out whether the atoms are balanced or not. Now look at the number of atoms on each side of the equation:

Now, the number of hydrogen and oxygen atoms is the same on both sides of the equation. This is because the atoms do not disappear during a reaction. They are neither created nor destroyed.

They obey the Law of Conservation of Mass. When the numbers of different atoms are the same on the both sides, an equation is said to be balanced. Once the equation is balanced you can now add the state symbols.

An equation which is not balanced is not correct. An unbalanced equation implies that the atoms have been created or destroyed. It is therefore, wrong and calculations based on it are certainly unreliable

Remember that we cannot change the formulae of the substances involved in the reaction. These are fixed by the bonding in the substance itself. For instance, in attempt to balance the number of oxygen in water, H2O, we cannot write H2O2. We can only put a multiplying numbers before symbols and formulae, e.g. 2H2O.

Hydrogen burns in oxygen to form water. The equation for the reaction is:

How much oxygen is needed to burn 1g of hydrogen?

How much water is formed when 5g of hydrogen is completely burned in oxygen? (Atomic weights: H = 1, O = 16)

So, 1g of hydrogen needs 8g of oxygen 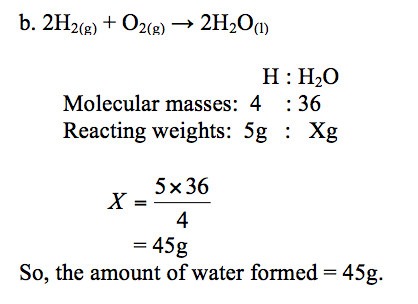 The Different Between Molecular Equations and Ionic Equations

In order to be able to derive an ionic equation from a molecular equation, one must be acquainted with the solubility rules as outlined below:

<> All sodium, potassium and ammonium salts are soluble.

<> All nitrates, chlorates and acetates are soluble.

<> All binary compounds of the halogens (other than F) with metals are soluble, except those of silver, copper, lead and mercury (lead halides are soluble in hot water).

<> All sulphates are soluble except those of silver, lead, mercury (I), barium, strontium and calcium.

<> All carbonates, sulphites and phosphates are insoluble except those of ammonium and alkali metal (Group I) cations.

<> All hydroxides are insoluble except those of ammonium, barium and alkali metal (Group I) cations.

<> All oxides are insoluble except those of calcium, barium and alkali metal (Group 1) cations; these soluble ones actually react with the water (hydrolyse) to form hydroxides.

1. Write a balanced formula equation for the reaction.

2. Split all soluble reactants and products into individual ions, clearly indicating their state symbols. Remember that substances that exists as molecules such as water, gasses and concentrated mineral acids, precipitates and neutral atoms do not consist of ions and hence do not ionize in water.

4. Re-write the remaining ions. This is the net ionic equation for that reaction.

Consider the reaction for neutralization of hydrochloric acid with sodium hydroxide.