Air is a mixture of different gases. The gases that make up the air include nitrogen, oxygen, carbon dioxide, noble gases (argon, helium, neon, krypton and xenon) and a little water vapour. Air may also contain traces of impurities such as carbon monoxide (CO), sulphur dioxide (SO2), hydrogen sulphide (H2S) and other gases. The presence of these gases in air results in air pollution. Table bellow shows the composition of air by volume. The proportion of water vapour and impurities in air is very variable.

The Gases Present in Air and their Proportions

The composition of air is not exactly the same everywhere. It changes slightly from day to day and from place to place. There is more water
vapour in the air on a damp day and in air above water bodies such as oceans, seas, lakes, rivers, etc. Over busy cities and industrial areas
there is more carbon dioxide. But the uneven heating of the earth’s surface by the sun causes the air to move continually, resulting in
winds. The resultant winds spread the pollutants around.

The percentage composition of air by volume

The Presence of Different Gases in Air

The determination of air by mass was carried out by Dumas in 1841. The apparatus used consists of three units as shown bellow.

The three parts of the apparatus include the following: 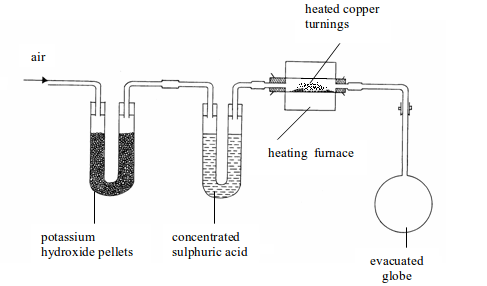 Determination of the composition of air by weight

The three parts of the apparatus would, therefore, remove all carbon dioxide, water vapour and oxygen contained in air. The remaining gas
which enters the weighed evacuated flask (globe) will be atmospheric nitrogen and, of course, plus the rare gases. The copper will have
reacted with all oxygen to form copper (II) oxide. The increase in mass of the copper will give the mass of oxygen. The increase in weight of
the globe will be due to the weight of nitrogen and the rare gases. If we neglect the weight of carbon dioxide, the percentage of oxygen by
mass (weight) in dry, pure air is 23.2% and the remaining 76.8% is the percentage of nitrogen and rare gases.

The Percentage of Oxygen in Air Experimentally

Determine the percentage of oxygen in air experimentally

1. Experiment. Determination of the presence and proportion of oxygen in air by combustion of a candle

In the experiment, the initial volume of air was found to be 70.5 cm3 and the final volume was 55 cm3. The percentage of oxygen in the air is calculated in two steps:

Therefore, the volume of oxygen used for combustion of the candle = 14.7 cm.

Therefore, the percentage of oxygen =

In practice, it is difficult to get an accurate result with the above experiment.

This is due to a number of reasons such as:

Experiment with combustion of copper in air gives the more accurate results than the combustion of the candle. The copper
reacts with oxygen in the air to give copper (II) oxide.

2. Experiment . Determination of the presence and proportion of oxygen in air by the combustion of copper in air

2. The final volume of air in the syringe, at the end of the experiment, is less than that of the original volume. This is because oxygen in the
original air has combined with copper

The volume of air in the syringe at different heating and cooling is as shown below:

Volume after first heating and cooling = 82

Volume after third heating and cooling = 79

The presence of carbon dioxide in air

Carbon dioxide is present in air to the extent of 0.03% by volume. The gas is formed during the combustion of all common fuels – wood, coal, coke, natural gas, petrol, diesel, paraffin oil, etc, all of which contain carbon.

It is breathed out as a waste product of respiration by all animals. All sorts of combustion and burning produce carbon dioxide. The gas produced by all these processes accumulates in air. However, the amount of carbon dioxide in air remains constant instead of the tremendous quantities released into the atmosphere. This is because plants take up carbon dioxide. They then convert it into complex starchy compounds during photosynthesis. The gas also dissolves in ocean water and other water bodies.

The reaction involved is as follows: 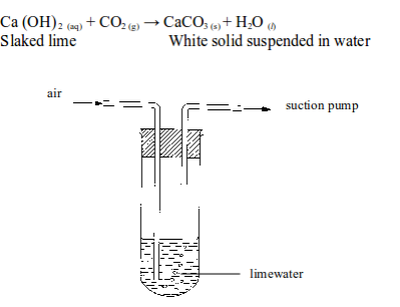 Testing for the presence of carbon dioxide in air

The presence of water vapour in air

Water vapour is present in air in varying quantities. It is given off by evaporation from the oceans, lakes and rivers. The presence of water
vapour in air can be demonstrated by exposing deliquescent substances to the air on a watch glass. These are substances which when exposed to air tend to absorb much moisture from the air, dissolve in that moisture, and finally form a solution. Examples of deliquescent
substances include calcium chloride, sodium hydroxide and phosphorous pentoxide.

The resulting solution is distilled. The colourless liquid obtained from distillation may be proved to be water by various water tests such as
use of cobalt chloride paper or anhydrous copper (II) sulphate. The cobalt chloride paper turns from blue to pink in the presence of water.
The white anhydrous copper (II) sulphate turns blue. Any of the two tests confirms the presence of water.

About 1% of the air by volume is made up of the noble gases. The most abundant of the noble gases is argon. Others are neon, xenon, krypton and helium. The proportion of these four is very minute. Argon and neon are used in “gas-filled” electric light bulbs and coloured “neon” electrical signs. They are obtained from liquefied air.

The air always contains small quantities of many gases. Such gases include hydrogen sulphide, sulphur dioxide, as well as dust and other solid particles, especially in industrial areas. These gases are given off during the combustion of coal, and the fuels resulting from coal.

SEPARATION OF AIR INTO ITS CONSTITUENT GASES

The air we breathe is necessary to keep us alive. It is also a chemical resource. Oxygen is used in steel making, and nitrogen is used in making fertilizers. To use these gases in this way, they must be separated from the atmospheric air. Air, as we studied in chapter 5, is a mixture of different gases. The method used to separate its constituent gases is fractional distillation. The gases have to be liquefied so that the mixture can be fractionally distilled.

The process of separating the air into its constituent gases is difficult. It cannot be done in the laboratory. It is only done in industry. The chemical industry needs the gases from the air in their pure form.

The air is cooled and compressed to form liquid air. The liquid air is allowed to warm up. Nitrogen boils off first because it has a low
boiling point, -196°C. Argon follows by boiling at -186°C and finally oxygen at -183°C

Figure above illustrates all the steps that take place during the process. 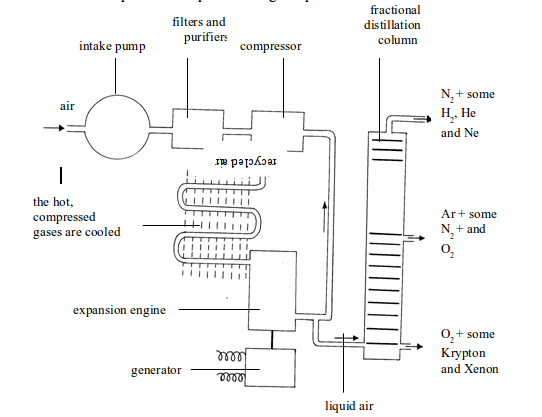 Rusting is the name given to the oxidation of iron or steel in damp air. It is also called corrosion. Rust is hydrated iron (III) oxide. It is a soft, crumbly solid and hence weakens the structure of iron and steel. During rusting, iron reacts with oxygen to form brown iron (III) oxide

Note: The x in the equation indicates that the number of water molecules in the hydrated iron (III) oxide can vary. So, both oxygen and water are needed to cause rusting of iron.

Rusting is a serious economic problem. Large sums of money are spent each year to replace damaged iron and steel structures, or protecting structures from such damages. Rusting of bridges, corrugated iron sheets on house roofs, containers, articles, etc. require an expenditure of big sums of money as well as labour for replacement. Rust weakens structures such as car bodies, iron railings, and ships’ hulls, and shortens their useful life. Preventing it can cost a lot of money. All efforts must be made to stop iron or steel items from rusting. This can be achieved if we know the conditions necessary for iron to rust.

The Conditions Necessary for Iron to Rust

When iron is left in contact with both water and oxygen (or air), it reacts to form hydrated iron (III) oxide. Iron will not rust on exposure to dry air or air-free water (water that has been boiled to expel all dissolved air) only. However, iron will easily and readily rust in water
that has dissolved air in it. In figure 6.8, only the iron nail that is in contact with both water and air rusts. Therefore, rusting will only
occur in the presence of both water and oxygen. If one of the two conditions is excluded, in one way or another, rusting will not take
place at all. 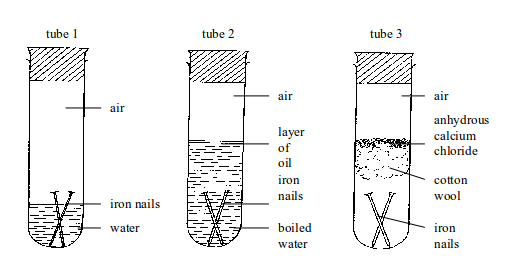 In tube 1, nails are in contact with both water and air (oxygen).

In tube 2, the water has been boiled to expel the dissolved air. In addition, any air above the water is prevented from dissolving in boiled water by a layer of oil. So, the nails are completely shielded away from air.
Therefore, rusting is impossible. In tube 3, nails are in contact with air only. The moisture present in air is absorbed by anhydrous calcium
chloride. Any moisture that might have been absorbed by the anhydrous calcium chloride is prevented from reaching the nails by a tuft of
cotton wool. The cotton wool also absorbs some moisture directly from the air. Therefore, tube 3 will always carry dry air (moisture-free
air). Hence, no rusting of iron nails occurs.

This experiment demonstrates the fact that for iron to rust, both water and air (oxygen) must be present. If one of these conditions is controlled, no rusting can take place.

Similarity between rusting and burning

Chemically, rusting and burning are similar processes in that they both require oxygen. Consider the burning of magnesium to give magnesium oxide.

In this process, magnesium combines with the oxygen of the air to form magnesium oxide.

During rusting, iron combines with oxygen of the air in the presence of water to form brown hydrated iron (III) oxide, “rust.”

In addition, the two processes, burning and rusting, are exactly similar in that they both generate heat. The only difference is in the time
required for each of the two processes to take place. During rusting heat is given out, but without being noticed because of its slower rate
of production. Burning produces noticeable heat and light.

The Different Methods of Preventing Iron from Rusting

We have learned that for iron to rust there must be direct contact between the iron and both water and oxygen from the air. Therefore, in order to stop rusting we must protect iron from either water (moisture) or oxygen (air) or both. The following are some of the methods used to prevent iron from rusting: