Home History HISTORY FORM ONE TOPIC 3: DEVELOPMENT OF ECONOMIC ACTIVITIES AND THEIR IMPACT

HISTORY FORM ONE TOPIC 3: DEVELOPMENT OF ECONOMIC ACTIVITIES AND THEIR IMPACT

Handcraft industries: Man used hands and skills to produce tools and weapons of these industries.

Industries is the place where raw materials are processed into finished goods e.g. cotton-cloth

Specialized handcraft industries in Africa include: 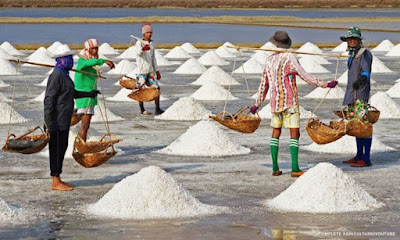 These are industries, which engaged in production of soil in pre-colonial Africa.

1. Obtaining salt from different reeds:  Reeds were collected, dried and burned, the ashes would be filtered while the ashes remain liquid would be evaporated and residue would be used as salt.

Places: – Near Lake Victoria, Kyoga, and Albert, among Buganda and Bahaya tribes and among Mang’anja people near shores of Lake Nyasa.

2. Obtaining salt by boiling and evaporating method: Sea or ocean water put into pans and left to evaporate, the salt crystals would be collected and used as salt.

Places: At Taghaza, Bilma around Lake Chad in western Sudan. Near lake Bangwela and river Luapala in central Africa.

TRADE IN THE PRE-COLONIAL AFRICA

Trade is the process of buying and selling of goods and services between people. There was need to trade in order to get all things needed by the communities.

Trade tends to develop in any society where there is surplus production.

Local trade was not for profit making but just to obtain essential goods. i.e. pastoral communities like the Maasai needed vegetables and grains from cultivators like the Nyakyusa and the Chaga.

Some important market centers emerged along the market routes.

It was not for profit making. For example, regional trade was Trans Sahara trade, Long distance trade of East Africa and Central Africa. Regional trade in the pre-colonial Africa took place in 19th century.

The major societies which involved in long distance trade in East Africa were:

The Kamba were leading the long distance trade through northern route in the 19th century. They Kamba caravan brought ivory, guns, hides and beeswax from the interior. From the Coast they obtained cloth, salt, copper, cowrie’s shells and jewelers.

The Nyamwezi dominated the central route conducted trade between the interior of Tanganyika and the coast. The Nyamwezi sold slaves and ivory, hide rhinoceros horn.

The Yao traders got beads and cloth from Kilwa. They also captured and sold slaves from neighboring communities, Yao chiefs such as Mpanda, Mataka, Machemba and Mtalika dominated the Southern route during the long distance trade.

The rise of trade centers such as Saadans, Pangani, Bagamoyo, Tabora, Ujiji, etc.

The rise of trade routes.

The rise of powerful Empires/Kingdoms such as Nyamwezi.

New food crops such as maize, rice and cassava were introduced.

Spread of Islam by the Arabs to the interior Tabora and Ujiji.

The rise of inter-tribal wars in order to get slaves.

Many elephants were killed, as there was high demand of Ivory.

It led to depopulation and under development in some areas.

Foreigners used trade routes to reach to the interior.

Exploitation of African wealth by Europeans and Asians.

Decline of local industries in Africa.

The major aim was to get profit for example a salt traders was exchanged salt for hoes not because he wanted to use hoes but he wanted to resell them at a profit later.

It became important in the 1st century AD after the people of West Africa to discover the use of camel and led to formation of many trade routes.

The Trans Saharan trade was known as dumb trade because there was no common language, which was used. People who involved in the trade; West Africa; North Africa and Savannah Region.

People (traders) organized themselves in groups known as CARAVANS.

Goods involved in the trade:

Eastern route – This began in Tripoli, Marzul and Bilma.

FACTORS THAT LED TO THE GROWTH OF THE TRANS-SAHARAN TRADE

1. Stability of the communities

These goods included gold, ivory and slaves. Through trading Western Sudan exchanged her own commodities with goods from Western Europe and Asia. In turn, she got clothes, guns and other commodities.

3. The surplus production in Western Sudan

was adequate to sustain demand for products such as kola nuts and gold, hides, ivory slaves, whereas Taghaza produced enough salt to meet the needs in Western Sudan. The high production capacity in the region enhanced the growth of the Trans Saharan trade.

4. The use of camels for transport

5. Geographical location of the region

The location and climate favored the production of kola nuts and other foodstuffs that were needed in the community, especially the forest region to the south. The region of Western Sudan had no impassable forests because many areas were covered by short grassland. This enabled traders to cross the desert without fear or any difficulty.

6. The invention of a medium of exchange

contributed to the growth of the Trans Saharan trade. At the beginning, only the silent barter system of trade was practiced. Later on, cowrie shells were introduced as a convenient medium of exchange. This in turn facilitated the development of the Trans-Saharan trade.

This was attained after Arabic language became the trader’s medium of communication. This in turn facilitated the trade by making communication between the traders easy.

8. Absence of competition for trading activities in the region

There were no regular ships that visited the coast of West Africa. As a result, what was produced from the forest zone was peacefully transported to North Africa through the Saharan desert.

EFFECTS OF THE TRANS SAHARAN TRADE IN AFRICA

It led to the growth of empires like Ghana, Mali etc

It increased development of Agriculture as agricultural products used in trade.

It led to the introduction of Arabic & Islamic religion cultures.

THE DECLINE OF THE TRANS-SAHARAN TRADE

By the second half of the nineteenth century, the volume of Trans-Saharan trade started to decline. A number of obstacles or problems have been identified to explain the decline.

Strong desert winds: The traders could not withstand the hazards of sand storms. Many abandoned the trade as a result.

Traders faced the danger of getting lost in the desert because the routes were not clear. Once traders got lost, they would wander in the desert for a long time and eventually die of thirst and starvation.

Desert robbers who made their living by stealing from trade caravans subjected traders to attacks. In the process, traders lost their lives and goods. This discouraged traders from participating effectively in the trade.

The extreme unfavorable climatic conditions to traders. The heat and high temperatures during the day and every low temperature at night due to the absence of cloud cover discouraged traders.

Traders faced the danger of highly poisonous desert creatures whose bites could result in death. These included snakes and scorpions.

Traders faced language difficulties. This hampered communication during trade. As such, “silent trade” had to be used initially.

Commodities obtained from Western Sudan such as salt and gold faced competition from similar goods from other America cheaply. As result, the volume of Trans-Saharan trade decreased because Western Sudan could no longer claim a monopoly in production of certain commodities like salt and gold. In addition, gold from Zimbabwe via Sofala port by the Portuguese ended up in Europe.

The abolition of slave trade contributed to the decline of the Trans-Saharan trade. Slaves were the main item of trade. When slave trade was abolished, trade started to decline.

Wars: The war in Morocco and the one between Christians and Muslims disrupted the smooth running of the trade. The Moroccan invasion of western Sudan in 1591 AD disturbed the growth of the trade by taking gold at Wangara.

Finally, the Trans-Saharan trade collapsed in the 16th century. From this period onwards, West Africa witnessed the expansion of European occupation on the coast of West Africa. 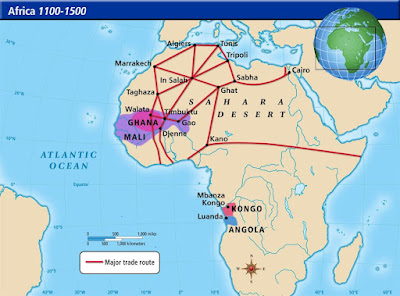